I found this in my "drafts" folder from 2013. This year, 2018, the Glasgow School of Art suffered yet another devastating fire so I felt it important to publish this piece. The Glasgow School of Art where a lot of creative and unique work was carried out by Charles Rennie MacIntosh. I remember the 2013 trip well and how this house built in the '89  - 90's just blew me away...the plans were drawn up for a competition by Charles Rennie MacIntosh and he worked on this with decorative artist Margaret MacDonald ( his wife)."House for an Art Lover" was not built in their time, however I believe the romance that MacIntosh and MacDonald put into their work was captured. I was fortunate enough to visit Scotland twice this year and each trip was most enjoyable. In August our daughter and two grandchildren accompanied us and I have to say the results were amazing. The Willow tearoom with its tall MacIntosh designed chairs and the Glasgow Rose depicted on may souvenirs of the day was "Glasgow" for all intent and purpose. This was the flavour I wanted to share. 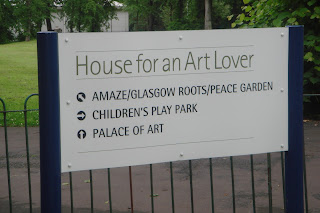 Now on with the story...

... born in Glasgow in 1868 he became an architectural apprentice around the age of 16 years with a Vincent Street company in Glasgow.  In addition to his work schedule he attended evening classes at the Glasgow School of Art. He was a skilled draftsman and talented watercolourist.  He won a scholarship ( The esteemed Alexander Thomson Traveling Scholarship) which meant he could study abroad. However, whilst at the Glasgow School of Art Charles met Herbert McNair who became great friends and the two were introduced to the MacDonald sisters, Margaret and Francis in 1899. The four of them were known as "The Glasgow Four". Margaret was an accomplished decorative artist and she married MacIntosh in 1900.
There were many opportunities for the couple to gain recognition. One piece they worked on together was an entry for a European competition "House for an Art Lover" organised by a German art publisher Blogged April 1st.

﻿﻿Although the house was not built in MacIntosh's time construction commenced in 1989 and was completed by the City of Glasgow in 1996 ( Architect Graham Roxborough). You will note it's similarities in colour and design/ style to MacIntoshes Hill House, Helensburgh. Quite unique.
﻿


﻿﻿Bellahouston Walled Gardens on the site are worth a visit too.

Life is Beautiful in  a "House for an Art Lover".