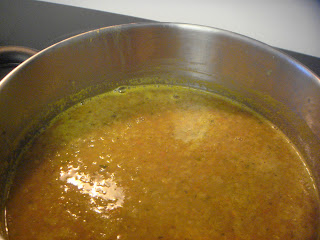 When I was out and about today all I heard was people "making soup talk".  In the grocery store, at Homesense etc.  Yes, you could say I was eavesdropping but they were speaking so loud I couldn't help it. Then reading Edgar's blog on http://blacksheepsite.blogspot.com/ he mentioned he had Tomato soup today and he seems to like soup for lunch.  We love soup in this house and we used to make it the tried and true way from scratch.  Ham bone/ soup bone, fresh veg, barley etc., depending on what we felt like. It took hours and usually had to have lentils and carrots to give it a nice "reddish" glow.  To get my son to eat it when he was young I named it "spiderman" soup ( well same colour eh) and he loved it.   In the winter we used to do this with our kids and one would grate and another would chop depending on their ability level at the time. The soup was usually a version of vegetable or Scotch Broth with barley and peas.  These busy days we tend to go back to the easy  "lentil" soup all the time and as family call it "spiderman" soup...my DGS loves it.  At nursery school they called his mother aside one day and said he was cooking in their little play kitchen and when asked what he was making he said " lentil soup".  They thought it was odd that a child so young would want to make lentil soup never mind have any knowledge of it - his favourite. He has been helping make this lentil soup since he was able to stand up on a chair.  It is sooo easy to make since I freed myself of the guilt of not making from scratch - although this is made from scratch but not the stock/bone part.

My mother made a lot of soup from whatever she could get that was in season at the Fruit and Vegetable shop (John Sangsters).  Now and again she would send me for the fresh ingredients so I had to memorize them and to this day I can rhyme them off- carrot, parsley, leek and turnip and sometimes a potato or two.  Every now and again she would change it a bit but it always started with carrots and parsley. I think this stood by me in all the education courses I have taken as I memorize a sentence that represents a list that I need to recall.

Today I am going to share my secret recipe for lentil soup with you.  I have been complimented on this soup so many times but have rarely shared the recipe other than with family. I would like to share it with you and hope you enjoy it as much as we do. 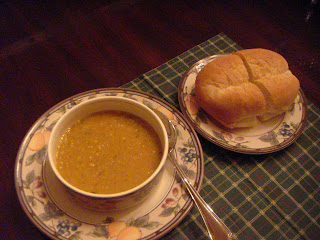 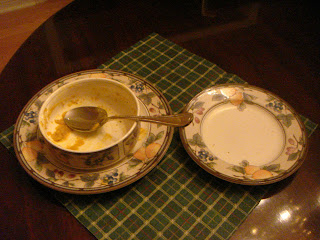 It's a beautiful life when you come in from the cold to a warm bowl of Maggie O's lentil soup and a crusty bun...enjoy﻿
Posted by Maggie O at 3:21 PM

Hmmmmm sounds good. I have written your recipe down. Thanks for sharing :-)