In Flanders fields the poppies blow
Between the crosses, row on row,
That mark out place; and in the sky
The larks, still bravely singing, fly
Scarce heard amid the guns below.
We are the dead.  Short days ago
We lived, felt dawn, saw sunset glow,
Loved , and were loved, and now we lie
In Flanders fields
Take up our quarrel with the foe;
To you from failing hands we throw
The torch; be yours to hold it high.
If ye break faith with us who die
We shall not sleep, though poppies grow
In Flanders fields. 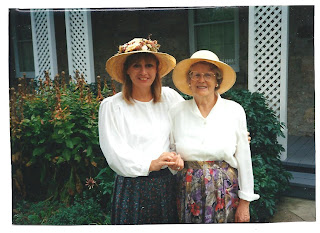 The McCrae cottage is in Guelph Ontario.   I had the chance to visit there with my mum and have a very lovely picture of her and I.  Mum passed away one year ago on November 13th at age 91...I am remembering her too at the MacCrae cottage for afternoon tea summer 1995 when she visited Canada.  She really enjoyed it and knew all the words to the poem and the story of John MacCrae.  She lived through the second world war and had stories to tell of the bombings in Clydebank ( Scotland), about 30 minutes away by car from where she lived, and how the planes would come right over their house.  Clydebank was famous for its shipyards...also the nightly visits to the bomb shelter where they would sing songs, bring flasks of tea and have a neighbourly chat until they felt the ground shaking with the bombing nearby...then the fear would set in.  They had black out curtains and wardens who checked to make sure no light was showing - you could be fined.  My father was in France and no-one knew when the soldiers would come home or if they would hear from them again.

Here's a little bit about the town where my Mum was born and I was born and brought up in, and the web site link where I got this information.  See picture of my old school below.

Thanking all who fought and are still fighting for our freedom.

http://www.valeofleven.org.uk/renton4.html
Renton's role in WW1
The response in Renton was not untypical, although it was at the high end of levels of volunteering for military service. It is reckoned that over 500 Renton men had volunteered by 1915, which means that virtually every man of service age had volunteered (this was before conscription had been introduced). Many more went to serve in subsequent years.

There are two main legends about Renton's role in WW1. Firstly, that every house in Back Street lost someone in the war. That is almost certainly true. The second involves Lord Kitchener, Minister of War, who was drowned off Orkney in 1915. Kitchener is reputed to have said during a tour of inspection either, that with more soldiers like the Rentonians he would have already finished the war, and/or, when learning that so many soldiers had come from Back Street, he expressed a wish to visit it.

There's no independent record of him actually saying either, but then again, there doesn't need to be for us to give them the benefit of the doubt, because these are the sort of things that Kitchener did say on his tours of inspection, and he certainly meant them at the time of speaking.

The war memorial, unveiled in September 1922 at the Howgate, at the south of the town, contained the names of 157 Rentonians killed in the War

Hi Maggie, first of all I'd like to say Thank You fo rthe lovely littel gift you sent me. I am sure I will put it to good use this Christmas time. Also, I would have emailed but I can't find your email address. I also wanted to say that is a lovely pictue of your mum and you. My parents and family are Scottish too from Kirkcaldy in Fife which is on the East Coast of Scotland. xx