On New Years Eve, in Scotland called hogmany, my mother made sure that "things" were how she would want them to be all year round. That they would start on a happy note and that would last all year. She was brought up to believe this was the way it worked and if you were in debt at New Year you would be in debt all year round, or if your house was dirty at New Year it would be dirty all year round. Bad luck would fall on them that had dirty houses and were in debt….today we may be bailing them out given the circumstances.

On Hogmany my mother insisted on cleaning and making sure that the New Year would be welcomed into a clean and tidy house and good luck would be ours. This practice was called the redding (getting ready for the New Year). I didn’t know that in my younger years. I just knew it was essential and had to be done or bad luck would befall us. I wasn’t sure if that was the plague or what, but that was the vision and fear in my head.

Of course some of it has rubbed off on me to make sure things are the best they can be on New Years Eve…but I think I am like that all the year round. Here is what I remember…

1. Make sure all the bills were paid. In those days you didn't pay them on-line or even by mail. You went into the office and paid in person and got a receipt. So if there was a bill that was not paid someone was getting on a bus and taking care of that, although I don’t remember any tardiness with that. The electric and gas were paid by meter right in the home, so it was vital that there was enough coinage in the event more than usual was required. Later the electric and gas boards took out the meters and people paid their bills at the local office which was a bus ride away and that was an extra cost…dragging 3-4 children to another town to pay a bill. How easy do we have it now.

2. All bed linens were changed in the morning having been on the washing line drying outside the day before whether frosty or not. Sometimes they froze and we would all go out and help take them in, stiff as boards, and once they thawed they were folded and put up on the “pulley” to dry out. The “pulley” was a drying rack that was on a system that lowered it to a reachable height to drape the clothing/ linens etc over it and then raise it again to sit near the kitchen ceiling to dry with the heat of the house/kitchen. The smell of fresh air on those frozen garments was twice as strong, delicious. Once dry or near dry they were ironed. Electric irons were not on the market or if they were we didn’t have one. The heavy cast iron “iron” was put on the gas stove to warm up…the smell of ironing then is not what it is today. Fresh scents filled the air.

3.All cleaning was done leading up to the last day of the year but the garbage needed to be taken out before 12 midnight and that meant the ashes from the fireplace had to be cleaned out too…so earlier in the night they were put in the tin bucket to cool before being taken to the “bin” and what was left for the rest of the night was acceptable. Some people read their ashes like they read tea leaves…my Mum would do this very occasionally giving it her best shot and if she knew something was to take place in the future she would read it in for fun ( tomorrow a very delicious steak pie will be enjoyed by all).

4. Then all had to be bathed and clean clothes or night clothes on and although we were not going to “the ball”…it felt special.

5. Before midnight my father took out the glasses and a very small bottle of whiskey to toast the New Year. I recall this when I was about 9 years old and I don't think it happened every year...maybe when they could afford it. He didn’t drink normally but this was obviously a treat for him. We all got a very small “taste” which didn’t go down too well as he toasted the New Year in. Whiskey seems to be an acquired taste even today. It was usually Lemonade or Orange Crush we got for any toast.

It is also believed to be lucky to be in the company of family and friends (of course) and all houses were open to visitors. Forgiveness was a big thing and family feuds (usually trivial situations) had to be put behind them to ensure a lucky and joyous New Year.

In the 60’s/ 70's people watched T.V. shows like the White Heather Club with Andy Stewart that were on from 10 o’clock to 12 midnight when all celebrated the New Year in tartan and “Auld Lang Syne”. I recall being in Canada and being on the phone for the Scottish New Year which was 7 o’clock our time to my brother. You had phone early to get a line, and staying on the phone until it was New Year according to the White Heather club. He turned up the sound and we enjoyed it across the pond…how costly was that. But I do still remember it and it was the next best thing to being there with family. At the end of the show Andy Stewart sang “ Haste Ye Back” 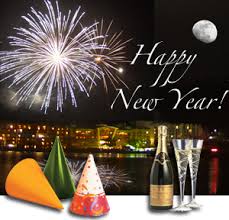 It’s a beautiful life at New Year for sure and my favourite toast is “lang may yer lum reek” which really means “prosperity”. If your chimney was smoking then you had coal which meant you were more financially well off than others.

What wonderful Traditions!
We don't have any not sure why,they weren't passed down. But then it just depends whether myself and the DH are tired or not, as this year we went to bed at 11pm, the kids weren't happy about that!